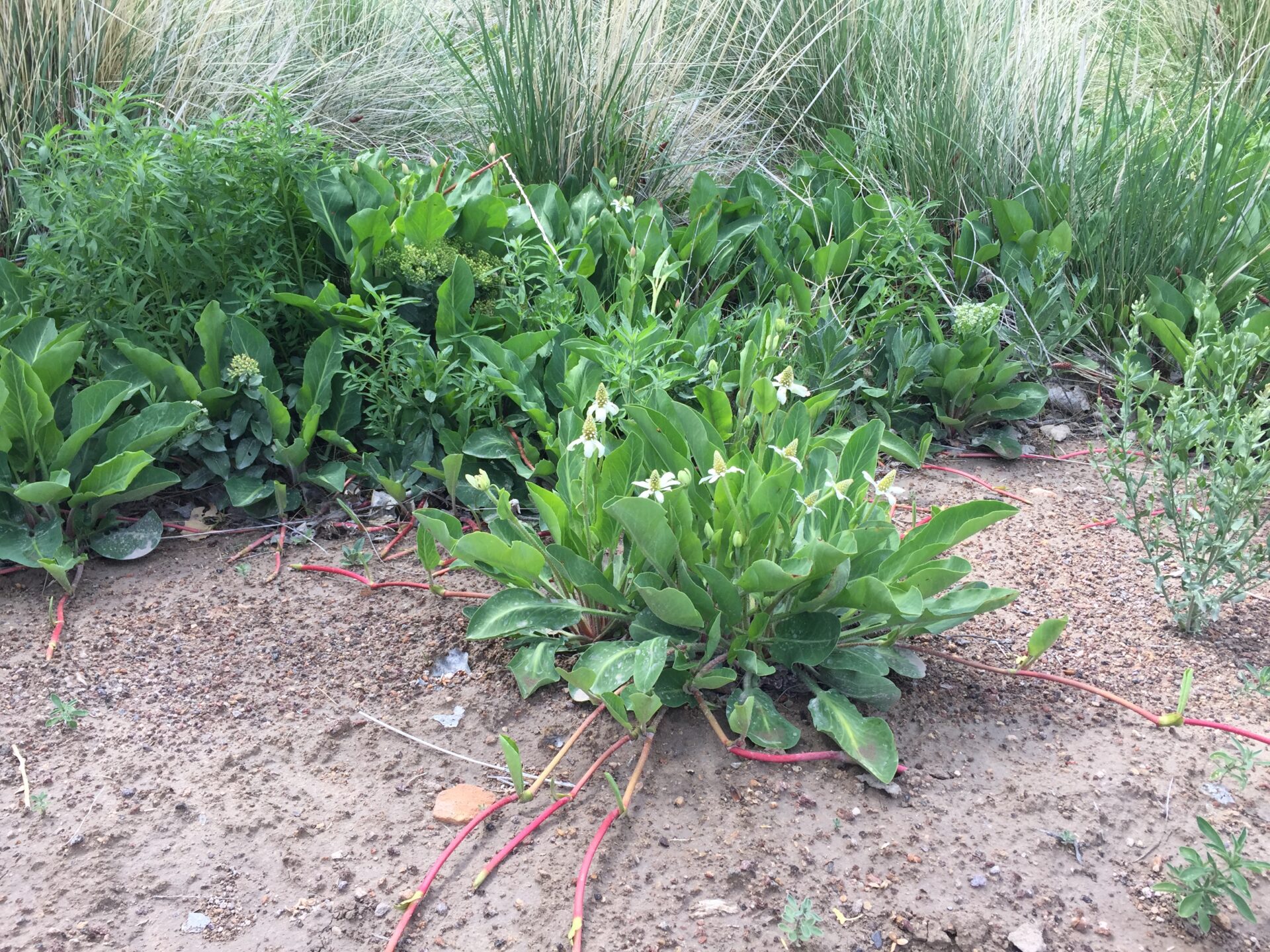 WHAT ISN’T THIS “COOL” WETLANDS PARK PLANT REPUTED TO CURE?

From curing stomach aches, colds, and diaper rash to sore feet, athletes’ foot, and infertility… and many, many more human ailments and complaints to boot! Yerba mansa (Anemopsis californica) is valued as a plant with curative properties by Native Americans and others. While the plant is common in shady, wet riparian habitats, its presence is uncommon in the Mojave Desert region where Clark County Wetlands Park lies. Yet inside the Park, yerba mansa thrives where and when conditions are right.

Yerba mansa is also known as “swamp root” or “lizard’s tail.” Coincidentally in the plant order (filum), it is the only member of the Lizard’s-tail (Saururaceae) family.

Growing up to 20 inches tall, yerba mansa often forms in large clumps or colonies of plants from horizontal stems (stolons and rhizomes) that spread at or just below ground level. Its smooth, six-inch long, oblong-shaped leaves are cool to the touch and rubbery in appearance. If you get close to the plant, you’ll find it slightly aromatic, a cross between camphor and eucalyptus.

In the Park, yerba mansa grows near streambeds and ponds and blooms in the spring through fall. While the plant appears to have showy white flowers, the large petals are actually “bracts” considered modifications of its leaves, like that of the red-bracted poinsettia. Rather, the “cone” contains its many tiny white flowers. Bees and other insects pollinate these flowers and seeds form inside. As the plants mature, the cone becomes a dense, solid structure embedding hundreds of tiny seed capsules. When the capsules split open, the seeds are dispersed. Additionally, plants are propagated by stolon/rhizome spread as well.

Various parts of the plant have been used as a medicine by Native Americans; some still gather the plant today. Typically, the roots and leaves are either boiled green or dried and used in various ways. For instance, the Moapa Paiutes would boil the leaves in a quantity of water and use the liquid in a bath for muscular pains and for sore feet. Others would mash the roots and boil them to make a poultice for swellings or an antiseptic wash, make a tea from the boiled roots for stomachache or a cold, or just chew and swallow the raw roots “as is.” There have also been claims that yerba mansa might cure venereal disease and certain cancers, though these claims have not been proved.

Next time you take a trek through the Park’s Nature Preserve, see if you can spot a stand of yerba mansa. It’s a beautiful plant and very precious within the limited space of riparian habitat found in Southern Nevada. Be kind to it.

– By Constance Carlson, Director of Communications; photo by Chris Leavitt.