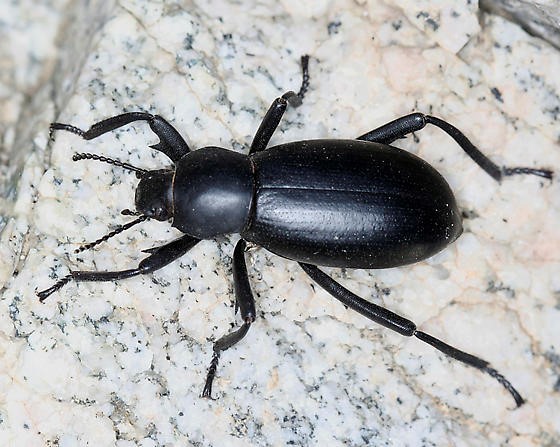 WHICH AMUSING WETLANDS PARK BEETLE CAN ALSO BE A “STINKER”?

Tap-tap-tap. Click-click-click. Clop-clop-clop! My husband Bob was taking a break from conducting his archaeological survey in the shade of a small screwbean mesquite when a sound broke the absolute desert stillness around him. Curious, he laid down his field notebook and started to look for its source, thinking there must be a two-inch-long horse coming towards him. Of course, no horse of that size appeared, but coming closer and closer was a large, shiny black beetle. The sound was his tiny, clawed feet hitting the hard, dry clay surface left behind after a recent rain. He seemed to be headed somewhere important and Bob was sitting directly in his path. Bob tried interrupting the insect’s progress by blocking him with a trowel. No deal! The beetle gave it one shove, marched right around it, and continued on his way. When Bob saw him last, he was still making rapid progress toward his goal, whatever that was!

Pinacate beetles (Eleodes armata), in the family Tenebrionidae are also called clown beetles, stinkbugs, or desert stinkbugs. The name “pinacate” comes from the Aztec name for the beetle, pinacatl, meaning “black beetle.” Approximately 120 species live in the western United States, in habitats that include open dunes, shrubs, and mountains. In desert ecosystems, they can be active all year. From spring to autumn, they are most active at night and at dawn and dusk to avoid the worst heat. In winter they switch to daytime activity to take advantage of warmer temperatures. Pinacate beetles may hide in leaf litter, under rocks and branches, or even in animal burrows, but they are very often seen, like the one Bob met, marching purposefully in the open.

An active pinacate is easy to recognize. The shiny black color sets it off from its background, and its “head-down-rump-up” posture as it hustles along the ground is distinctive. Much of the activity relates to finding the nearest food source, which these beetles do by scent. They feed primarily on organic debris, including foliage and flowers, but also fecal material and dead insects. They are attracted to moist locations where a drink of water may be available, sometimes appearing as if by magic when an ice chest or water bottle is emptied to snatch a quick drink before the puddle evaporates.

That shiny black color and all that walking around in the open would not seem to be a good strategy for avoiding predators, but for most potential enemies, pinacate beetles are off the menu. When threatened, the beetle assumes a “headstand” position, with its pointed abdomen in the air.  If the predator doesn’t take the hint, the beetle discharges a noxious spray from glands in the abdomen.  Larger desert species, like Eleodes armata, can spray up to twenty inches, multiple times if needed. The compound is a type of benzoquinone. It has an unpleasant odor, is difficult to wash off, and irritates eyes, skin, and mucus membranes.

There are a few predators, however, who have figured out how to eat a pinacate. Grasshopper mice  grab the beetles and force the abdomen into the soil, allowing them to eat the front half of the beetle.  Scorpions capture them in their pincers, point the abdomen away, sting the beetle between its armored body segments, and eat the soft interior body parts. Burrowing owls, loggerhead shrikes, and skunks also feed on pinacate beetles. As Arizona Cooperative Extension Agent Jeff Schalau says, “It’s a jungle out there for pinacate beetles too!”

At any time of year, you may be amazed (or amused) to see a pinacate beetle crossing a Clark County Wetlands Park trail, even right along the Las Vegas Wash.  The one CC Carlson and I saw crossing a gravel trail in the Nature Preserve last week would not stop to pose for a picture, even when I tried putting my finger in front of his face to slow him down. I guess he (or she) was on the way to the cafeteria!