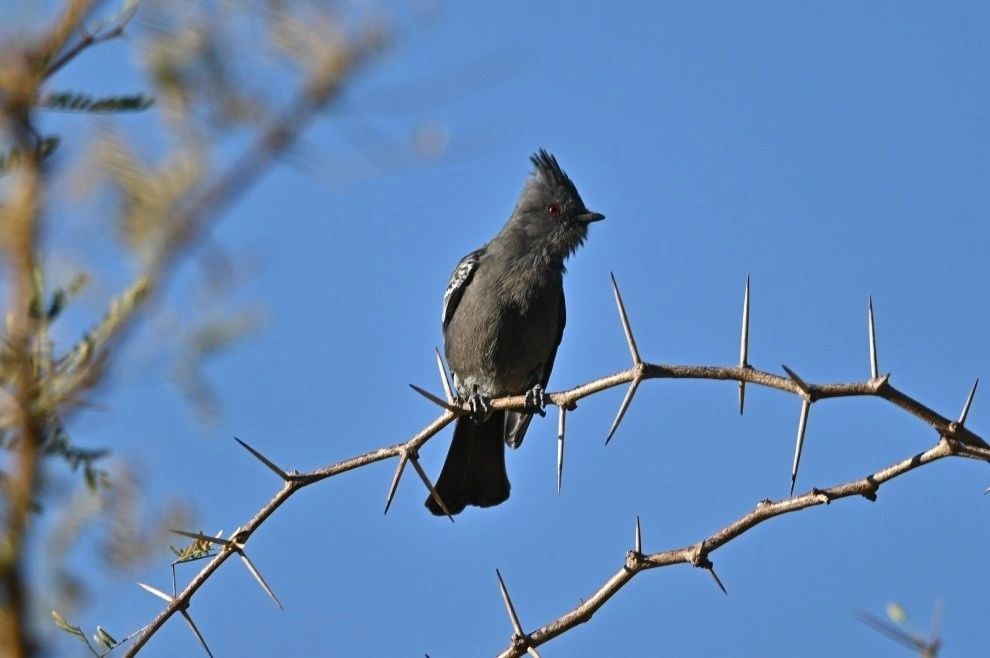 WHAT PLANT AND CRITTER HAVE A MUTUALLY SYMBOITIC RELATIONSHIP IN CLARK COUNTY WETLANDS PARK?

This lovely female Phainopepla   (Phainopepla nitens) seems to be listening for something – maybe her mate is calling! Early spring at Clark County Wetlands Park brings lots of bird song, as males set up and define their territories for the nesting season.

The Phainopepla is on the Park Audubon checklist as a common resident in the Park, and walkers in the Nature Preserve’s mesquite woodland are almost sure to see them. These slender, erect birds with crested heads are said to give the impression of “garnet on velvet,” with their red eyes and the male’s shiny black feathers.  In fact, the name “Phainopepla” comes from the Greek word for “shining robe.”

The Phainopepla is primarily a berry-eating bird, though insects supplement its diet.  Its digestive tract is specialized for feeding on the berries of Desert Mistletoe (Phorodenron californicum), a parasitic plant that lives on mesquite trees. Mistletoe berries are low in nutrients, and a phainopepla may eat as many as 1,100 of them in a single day.

The Mistletoe and the Phainopepla depend on each other to survive. The birds need the berries, and the berry seeds often pass through the bird and stick to branches, where they sprout to form new mistletoe clumps.

Because the mesquite woodland habitat is no longer common in southern Nevada, the Phainopepla is considered a conservation priority in the state. The Mesquite woodland habitat in the Wetlands Park is perfect for the Phainopepla. Watch for them perched in the top of mesquite trees along the trail and listen for their fluid “Foo-wheat” call – one of the sounds of spring in the Park!