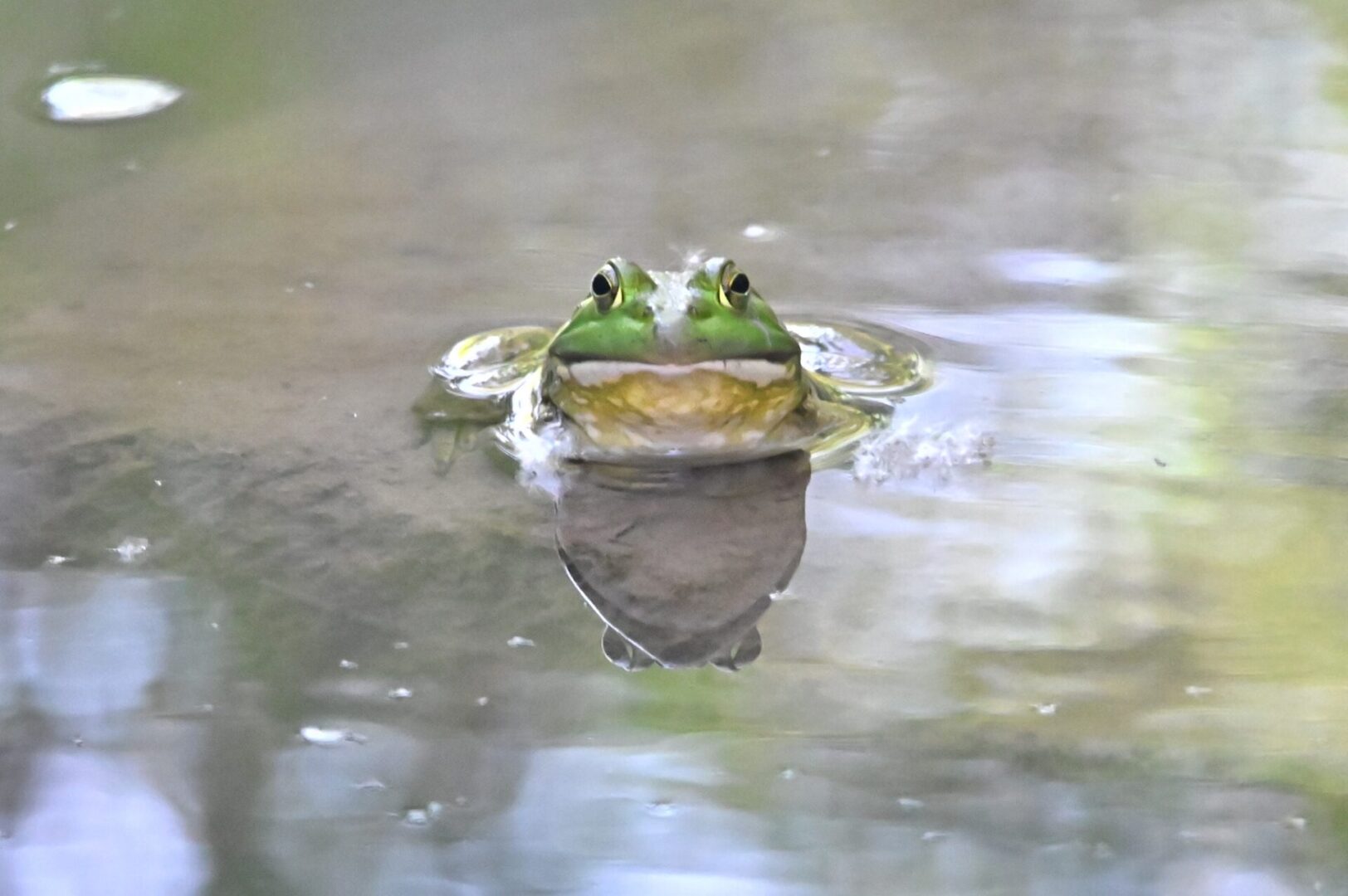 What Wetlands Park Critter “Croaks Up” a Storm in the Summer Months?

Bullfrogs are native to eastern North America, but have made their way into the western states, including Nevada, California, Oregon, Washington, and Hawaii. Here, they are considered invasive species due to their voracious appetite and the large number of viable offspring they produce, both of which have a negative effect on other amphibians and fauna.

Bullfrogs are sexually dimorphic, with males being smaller than females and having yellow throats. Males have tympana (eardrums) larger than their eyes, whereas the tympana in females are about the same size as their eyes. Bullfrogs’ dorsal (upper) surfaces are an olive-green basal color (either plain or with mottling) and banding of grayish brown. The frogs’ ventral (under) surfaces are off-white blotched with yellow or gray. Often there is a marked contrast in color between their green upper lips and the pale lower lips. Surprisingly, their teeth are tiny. The eyes are prominent with brown irises and horizontal, almond-shaped pupils. The limbs are blotched or banded with gray — fore legs are short and sturdy and the hind legs are long. The front toes are not webbed, but the back toes have webbing between digits except for the fourth toe, which is unwebbed. Bullfrogs can measure about 3.6 to 6 inches snout-to-vent and grow fast in the first eight months of life. Mature frogs can weigh up to 1.1 lbs., or more. The American bullfrog is the largest species of frog in North America.

The bullfrog breeding (“croaking”) season typically lasts two to three months and is most pronounced in our area from May to July. During this period, the males become territorial around females, spacing themselves in aggregate groups called choruses.

Choruses are dynamic and highly competitive, with males forming and remaining associated in one group for a few days, then breaking down temporarily and regrouping in a new area with a different group of males. The choruses’ goal: become the biggest “centers of attraction” in which their larger numbers result in greater acoustical displays. This commotion is more attractive to females and well as to other sexually active males. There are at least three different types of calls that the male bullfrogs make under different circumstances: “territorial” calls made as threats to other males, “advertisement” calls made to attract females, and “encounter” calls, which precede combat.

To further establish social dominance within choruses, bullfrogs demonstrate various forms of aggression, especially through visual displays. Posture is a key factor in establishing social position and threatening challengers. Territorial males have inflated postures while non-territorial males remain in the water with only their heads showing (see bullfrog in picture).

Bullfrogs are voracious, opportunistic, ambush predators that prey on any small animal they can overpower and stuff down their throats. Bullfrog stomachs have been found to contain rodents, small lizards and snakes, other frogs and toads, amphibians, crayfish, small birds, scorpions, tarantulas and bats, as well as well as many types of invertebrates, such as as snails, worms and insects. Bullfrogs can capture large, strong prey because of the powerful grip of their jaws after they quickly strike with long, soft tongues.

The speed of a bullfrog’s tongue strike is much faster than it should be if muscles were the only force behind it. Like the tension on a slingshot pulled all the way back, when the frog’s mouth is closed, tension is put into the elastic tissues of the tongue, and also into the elastic tendons of the lower jaw. When the frog attacks prey, opening its mouth is like letting go of the slingshot; the elastic force stored up in both the tongue and the jaw are combined to shoot the tip of the tongue toward the prey much faster than the prey’s ability to see the strike and evade capture, completing the strike and retrieval in approximately 0.07 seconds.

Bullfrogs can jump distances 10 times their body length due to their ability to extend and contract their muscles. I can personally attest to this feat. While conducting a Park tour with school children on the back side of Vern’s Pond, I spied a piece of trash close to the water’s edge. I bent over to pick it up, only to be rewarded with a “croak and a jump” by a startled bullfrog, who was using the debris for shade. I’m sure I beat that frog’s jumping record by the length of my stride to leave the premises!