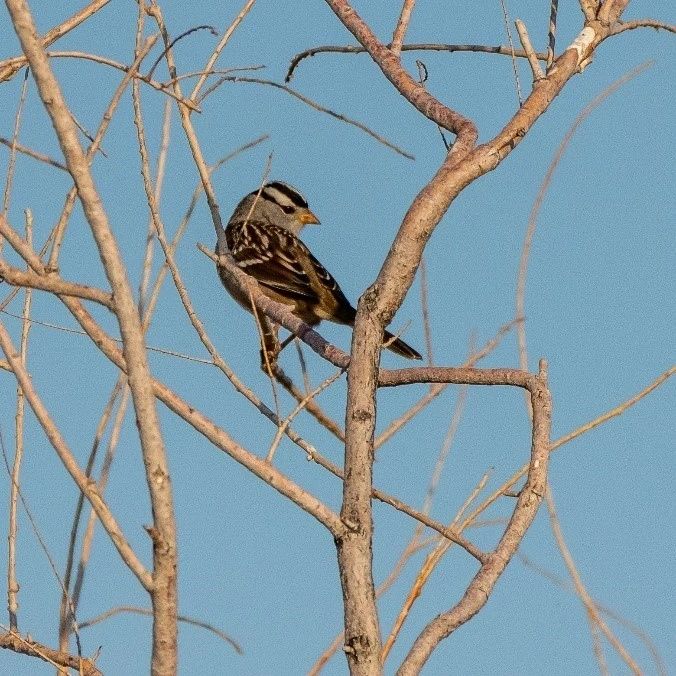 Sparrows can be difficult to tell apart. Luckily for the less experienced bird watcher, when the white-crowned sparrow comes to visit Clark County Wetlands Park in the spring and fall, it is very easy to identify. Their heads are eye-catching!

The large sparrows have small pale pinkish or yellowish bills and long tails. Both adult males and females sport bold black and white stripes on their heads. Even the immature birds have striped heads, though their stripes are rust brown on gray for the first year of their lives.

White-crowned sparrows breed mostly in Canada and Alaska, though some nest in mountainous areas of the western United States. Some are year-round residents along the Pacific coast. When migrating, one white-crowned sparrow was tracked moving 300 miles in a single night! Birds that breed in Alaska regularly migrate about 2,600 miles each year to winter in Southern California. Many white-crowns winter in Mexico.

With all that flying, Clark County Wetlands Park makes a great stop over for migrating white-crown sparrows. They prefer thickets and tangles of brush for cover and usually forage in low shrubs or in short grass, of which the Park has plenty. They also favor running water, so the Park ticks off several habitat boxes as a suitable resting spot.

During migration and in the winter, white-crowned sparrows travel in flocks of ten to twenty birds, often staying in one location for several weeks at a time. They feed together, scratching leaf debris on the ground with both feet for seeds and insects or perching in low-growing shrubs to eat seeds, buds, flowers, or small fruits. They also may take short flights to catch insects in mid-air.

As these sparrows are not reclusive, they readily flock to backyard feeders or seed scattered on the ground. The Park’s Nature Center’s Feeder Watch site is a perfect place to check for these conspicuous, jaunty sparrows when they are “in town” during spring and fall migration season!

White-crowned Sparrow foraging on the ground