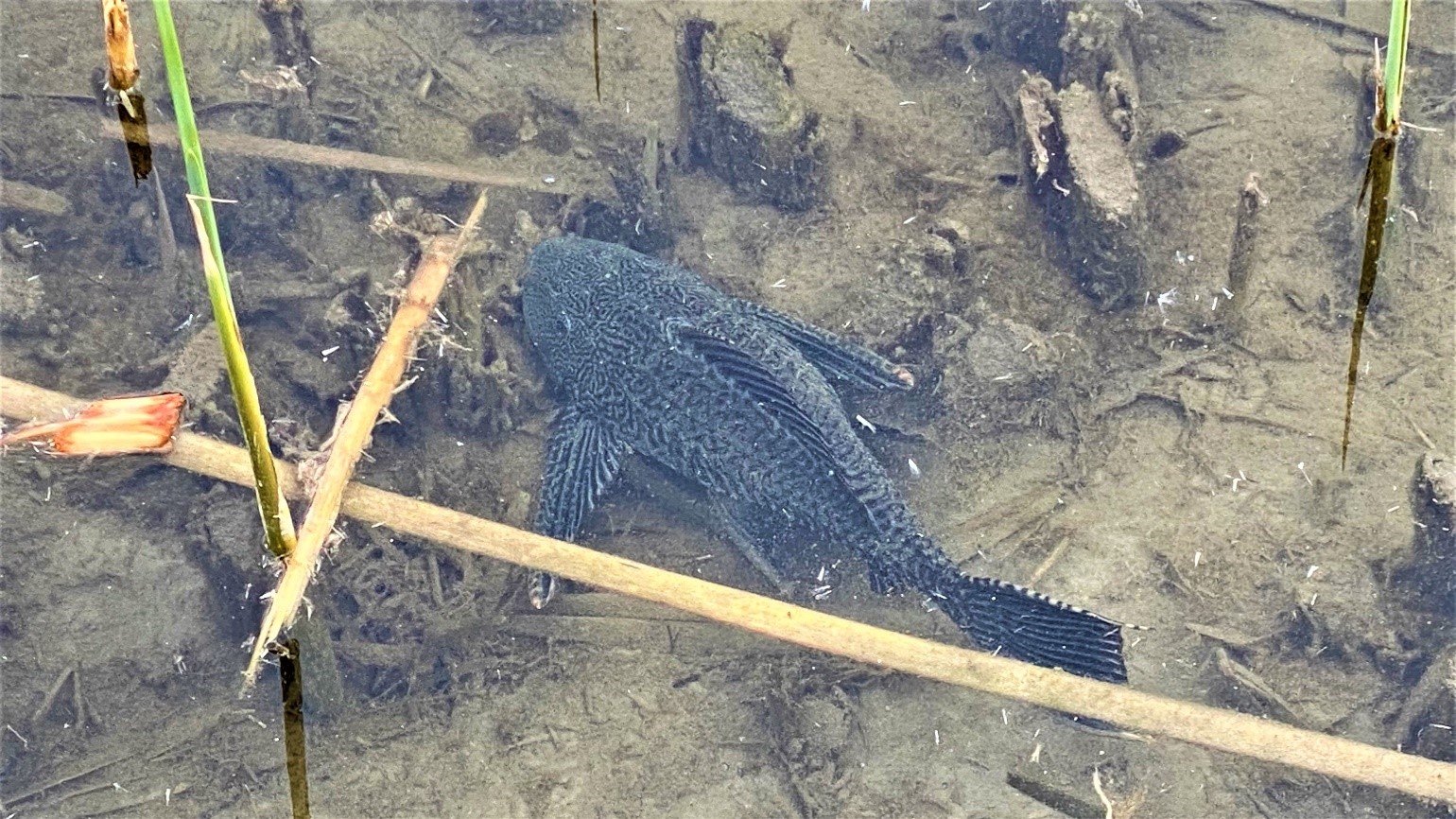 WHAT “introduced” FISH SPECIES at WETLANDS pARK can ALSO DO TIME ON LAND?

The plecostomus (Hypostomus plecostomus) is a real “invader from the fish tank” at Clark County Wetlands Park! This prehistoric- looking critter is an armored catfish belonging to the family Loricariidae, native to the fresh or brackish water streams of northeastern South America. Aquarium enthusiasts will quickly recognize this popular fish, though the ones swimming in the Park’s ponds and streams are likely much bigger (up to 20 inches long) than the cute young fish sold to eat algae from the sides and bottoms of home aquariums.

The plecostomus gets its name from its sucker-like mouth. The word plecostomus translates from Latin as “folded mouth,” and when the fish is turned upside down the mouth disc does appear to be folded or pleated. This sucker mouth allows the fish to “stick” to a surface like the glass side of an aquarium, and to hold and rasp its food. Like many catfish, the plecostomus is an omnivore, consuming algae, other aquatic plants, small crustaceans, and detritus. At the Park, they are often seen moving slowly along the bottom of the ponds, rasping up algae and small food particles as they go.

The plecostomus have upper bodies and heads covered with armor-like scales called “scutes,” which are also found on the shells of turtles, the skin of crocodiles, and the legs of birds. Naked soft skin covers their lower heads and bellies.

As a result of “aquarium dumps” by plecostomus owners, these invasive fish have quickly become established in many United States waterways, including Wetlands Park. They can readily tolerate salty or alkaline water and warm water temperatures. Though they normally breathe with their gills, they can also breathe air if necessary. When oxygen content in the water gets too low, the fish surfaces to breathe, taking gulps of air into its stomach, where the oxygen is absorbed. A plecostomus can survive out of the water for up to twenty hours, and can move on dry land (possibly even from one pond or stream to another) using its tail and the thick, toothed spines on its pectoral fins.

Numerous armored catfish are sold in pet stores. Confusingly to non-ichthyologists (fish biologists), all go by the common name “plecostomus.” They may also be called “suckermouth catfish,” “common pleco,” or even “janitor fish” (for their tank cleaning ability). A variety of colorful species are sold for aquariums, and color may vary from individual to individual of a given species, making it hard for the non-expert to tell just which armored catfish they are looking at.

If an opportunity presents itself, please let fish owners who are thinking about releasing their fish in the wild know that in general, released fish will not survive. Those that do can often out compete native fish in their own habitats and be very destructive to the ecosystem. A better option: many aquarium shops will “buy back” or trade larger fish for smaller ones that will fit in an existing aquarium. I know at least one aquarium fanatic who always kept one plecostomus in his tank for algae cleanup. He regularly traded in each one for a smaller model when it outgrew his tank. His fish shop loved getting the bigger ones back, so he made a profit on the deal every time!

In the Park, watch the bottoms and edges of streams and ponds for the flattened, dark shape of a feeding plecostomus. Often, more than one fish will be seen together. If you are watchful, you may also see one in the bill of a cormorant, heron, or other Wetlands Park bird.  Introduced plecostomus has become one of the tougher, more crunchy options on the menu for the Park’s birds and wildlife.