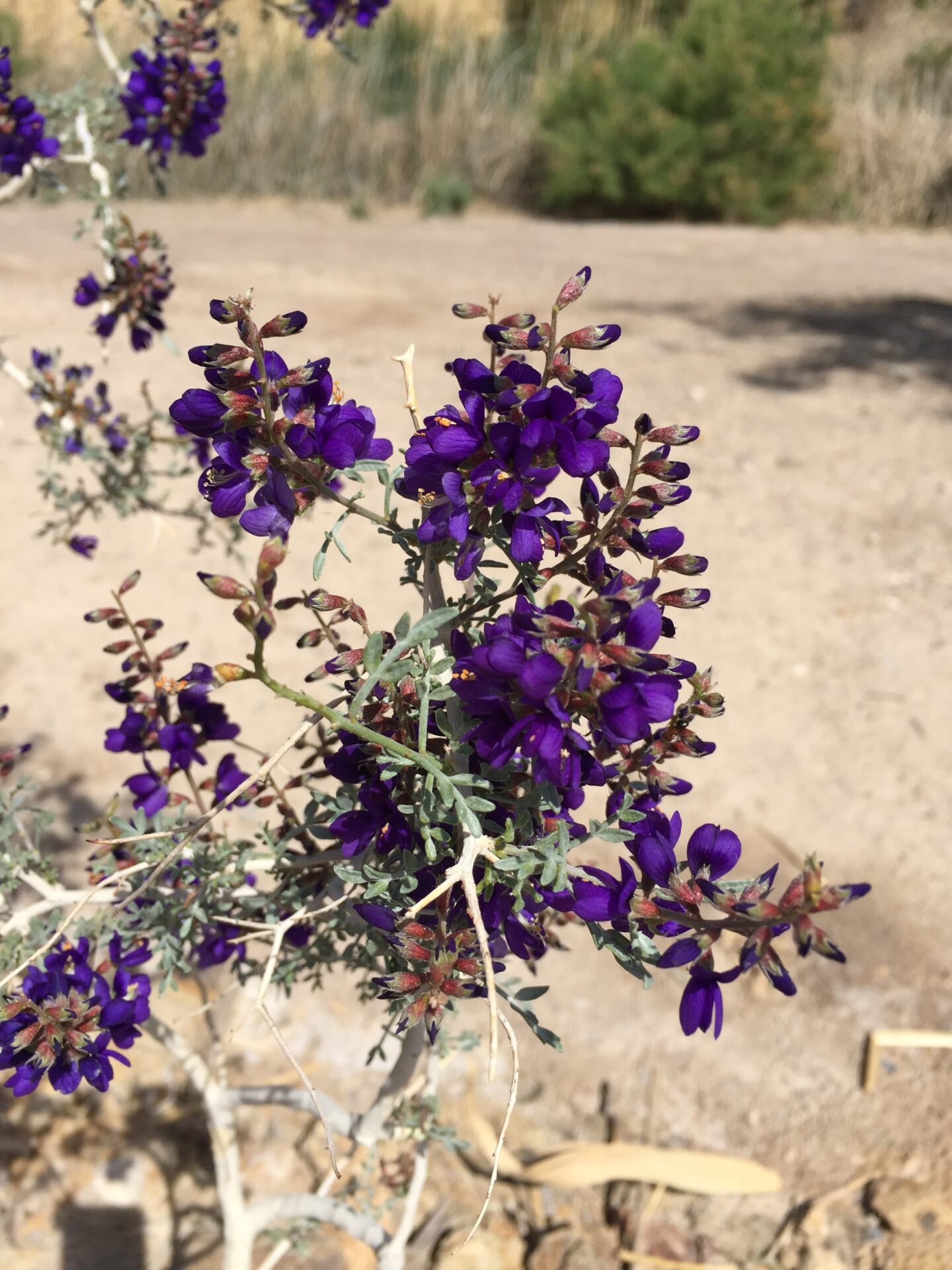 WHAT WETLANDS WONDER MAY FLOWER WITHOUT LEAVES?

What a show!  One of the great joys of late spring in the Mohave Desert is a stand of indigo bush (Psorothamnus fremontii) in bloom. The masses of deep purple flowers can be seen from quite a distance. A closer view reveals their vivid contrast with the plant’s white bark. And we can see it in Clark County Wetlands Park, though not in the Nature Preserve or in the green riparian corridor along the Las Vegas Wash. This show requires a walk on the “dry side.”

Indigo bush, like catclaw and mesquite trees, is a member of the pea family (Fabaceae). It grows two to four feet tall, with very distinctive white bark and branches that are twisted and gnarled into interesting shapes, especially in mature plants.  Because the small, gray-green leaves drop in cold weather and during periods of drought, naked white stems may be your first clue that the plant you are looking at is indigo bush.  Sometimes spring flowers appear on the plant before the leaves do!

The “indigo bush flower show” in April and May hosts bumble bees, butterflies, and moths, and attracts native bees in large numbers. It is followed by a crop of one-seeded, sharp-pointed or “beaked” pods covered with small, red glands. In good years, when temperature and rainfall allow, there may be a second bloom in the fall.

To see indigo bush at the Park, take a hike or bike ride along the North Loop Trail near Sunrise Trailhead. Indigo bush grows in the gypsum soils on the slopes and in the washes in the Desert Scrub habitat there, in company with creosote bush, bursage, range ratany, and other low elevation Mohave Desert plants.

For an easier view, drive North Shore Road in Lake Mead National Recreation Area. Large stands of indigo bush grow only a few steps off the shoulder of the road.

There are three species of indigo bush in the Mohave Desert. The species in Clark County is named for western explorer, presidential candidate, territorial governor of Arizona, and amateur botanist John C. Fremont, and has an alternative common name: Fremont’s Dalea.