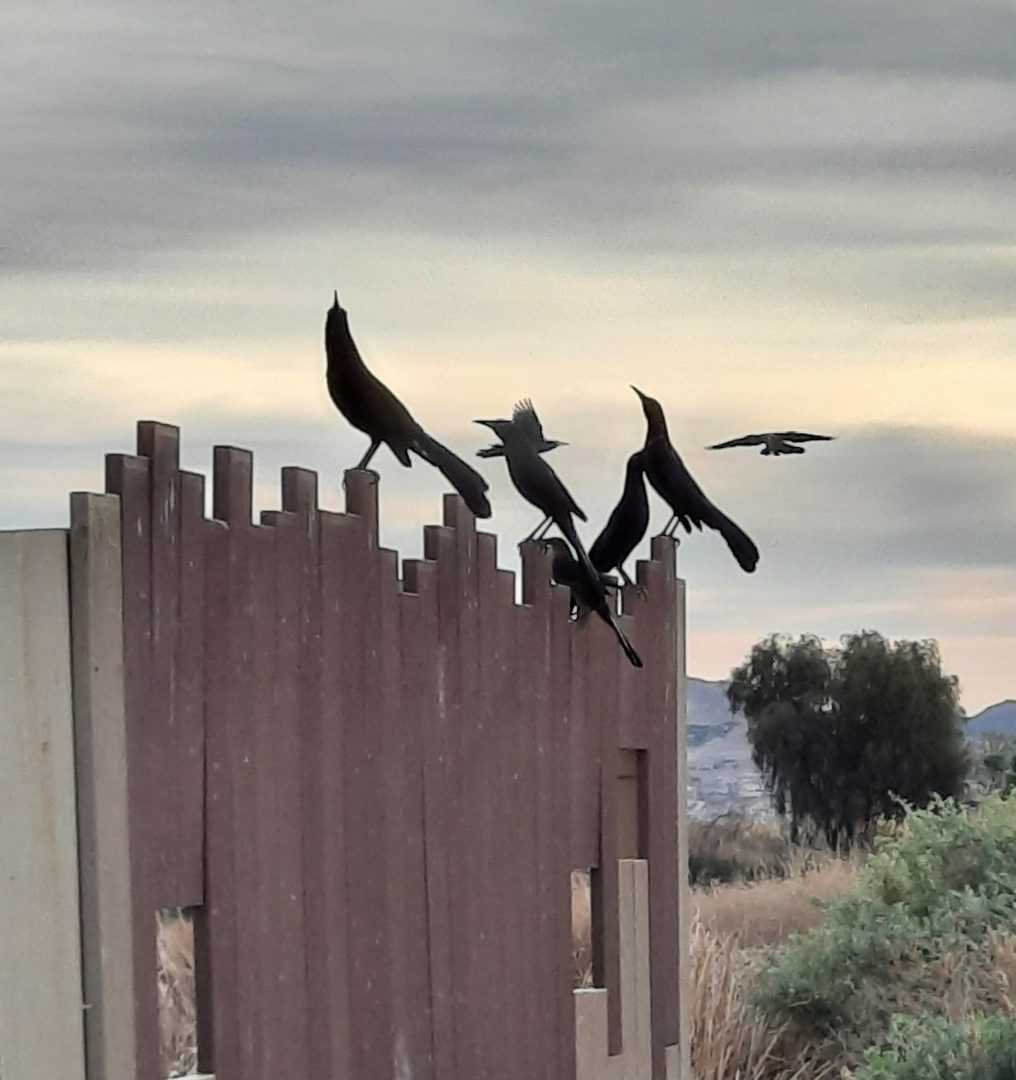 WHICH WETLANDS PARK BIRD HAS A VOICE LIKE A RUSTY GATE HINGE?

Great-tailed grackles (Quiscalus mexicanus) are common Clark County Wetlands Park residents and unlike some resident birds, they are not at all hard to see! These medium-sized members of the Blackbird family (Icteridae) are related to the red-winged and yellow-headed blackbirds and brown-headed cowbirds that also spend at least part of the year at the Park.

Male grackles stand out in a crowd. They are almost as big as crows, and have iridescent black feathers with a purplish gloss, very long keel-shaped tails that can be spread or folded vertically in half, and startling bright yellow eyes. They call attention to themselves with displays that involve fluffing their body feathers, spreading their wings and tails, vocalizing loudly, and finally striking a “my-beak’s-bigger-than-your-beak” pose with their bills pointed straight up into the sky!

Females are smaller and quieter. Their body feathers are buffy brown that darkens on their wings and tails and have a slight greenish iridescence. Like the males, they have bright yellow eyes.

Great-tailed grackles are social birds, flocking together during the day and roosting together at night. Palm trees are favored nesting spots. Grackle song has been described by David Allan Sibley as “a series of loud unpleasant noises: mechanical rattles, sliding tinny whistles, harsh rustling sounds, and sharp hard notes.” Should you pass by a roost near sunset, you will probably be treated to their boisterous cackling and ruckus as they settle in for the night. A roost at sunset sometimes sounds like the trees themselves are making all that noise as the birds often hide in the foliage!

Historically, grackles were birds of South and Central America. In the 1500’s, the Spanish priest/historian Bernardino de Sahagun recorded the introduction of great-tailed grackles from the Mexican coast to Tenochtitlan (now Mexico City) by the emperor Ahuitzol. The birds were likely a source of feathers used in dress, décor, accessories, and costuming. It was the first documented bird introduction by humans in the Western Hemisphere.

Grackles really do thrive around humans, and their range expansion since the early 1900’s in the western United States has been described as “spectacular.” They arrived in southern Nevada from Arizona in the early 1970’s, and their range now extends north to eastern Oregon, south to northwestern Peru, and east to western Arkansas. Grackles live and nest in orchards, open stream beds, wetlands, riparian areas, irrigated pastures, sewage treatment plants, lawns, golf courses, and urban landscapes – anywhere that has the water and food they need nearby.

Insects, grain, fruit, crustaceans, amphibians, fish, lizards, and the eggs and nestlings of other birds are all on their menu. They will visit urban feeders, search for food on the ground, beg outdoor diners for a bite from their plates, turn over objects to reveal the food beneath, and wade into shallow water for fish and tadpoles. They even take fish while flying close to the water’s surface, and other birds (like swallows) in flight!

Keep your eye out for these noisy, tough, colonial birds at the Park and across the valley. They can be very funny, especially as they try to cope with their huge tails on windy days!