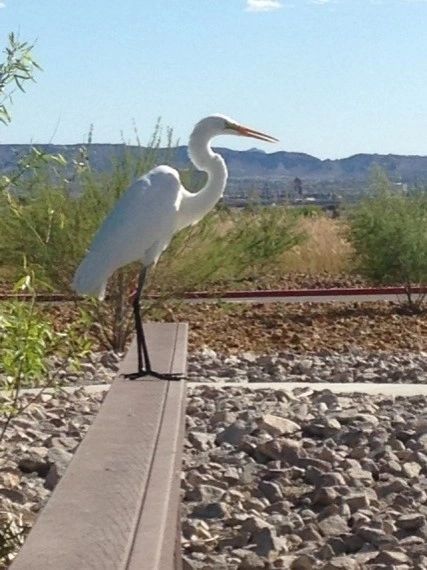 WHAT WETLANDS PARK RESIDENT IS THE SYMBOL OF THE NATIONAL AUDUBON SOCIETY?

The stately, three-foot tall great egret (Ardea alba), with its white plumage, yellow bill, and black legs and feet, is one of the most beautiful residents of Clark County Wetlands Park. It is also one of the most frequently seen wading birds along the Park’s streams and pond edges, where its white feathers stand out, even when it’s still in a pool of shade.

A hunting egret is fascinating to watch. They may stand and wait for prey, wade or walk slowly with neck extended, or pick food items from objects above ground or under water. They also may hop and flick their wings to startle prey, or hover above the water and suddenly plunge in headfirst to capture lunch. They may even resort to swimming, if necessary!

In breeding season, both sexes grow plumes called aigrettes on their backs, and participate in complex courtship displays. Their gorgeous plumage became so popular for decorating women’s hats in the late 1800’s and early 1900’s that the Great Egret and its smaller relative, the Snowy Egret, were almost hunted to extinction to satisfy demand for the feathers.

Not only were the adult birds killed, but because they were nesting, their eggs and nestlings also died. The impact of the plume trade was devastating. In 1902, the total weight of the plumes sold at the London Commercial Sales Rooms was 48,240 ounces – a little over 3,000 lbs. At roughly four birds per ounce, that meant some 192,960 nesting egrets were killed, plus two to three times that number of eggs and young!

Fortunately, worldwide indignation led to legislation that protected the birds and allowed egret species to make a comeback. In the early 1900’s, the great egret was adopted by the National Audubon Society as the symbol of the bird preservation movement and remains its symbol today. Watch for these long-legged waders as you walk the trail — we are fortunate to have them!