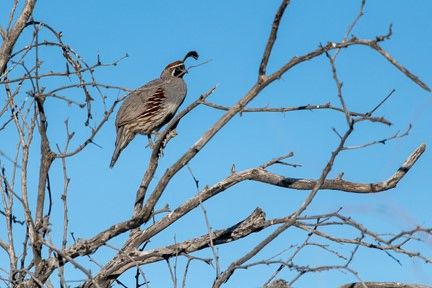 This male Gambel’s Quail is showing his best side to the camera from the branches of a mesquite tree. From his perch, he’s maintaining a lookout for predators above his habitat. His upright posture, rounded (potbellied) body shape, and distinctive black single feather “topknot” distinguish him from other birds at Clark County Wetlands Park.

Quail are very social and live together in groups called “coveys” that average 20 to 40 birds. They are often seen (and heard) moving quickly through dense brush, especially at their favored feeding times in early morning and late afternoon. When the birds race across open ground, their feet move so fast they seem to blur.

Gambel’s Quail forage on the ground for the seeds, grains, and green plants that make up 90% of their diet. Cactus fruit is a favorite when available, and young birds also eat insects. At night, they fly into bushes and trees to roost. They may live in very dry country but tend to concentrate in riparian areas and mesquite filled washes where the dense cover protects them from predators.

Spring is a great time to watch for the downy young birds sweeping like ocean waves across the ground as they follow their parents. Young quail leave the nest within a day of hatching and can fly short distances at about ten days old. Their parents show them sources of food, and the youngsters can feed themselves without help.

Gambel’s Quail are big talkers. On the ground, they may “cluck,” “cackle,” or “mutter” among themselves while moving from place to place or feeding. From their perches, you can hear them calling “Ahhh-ahh” or “Ahh-haa.”  When alarmed, they call “chick-chick-chick” to alert the covey to danger.

2. Gambel’s Quail feeding and “talking” to each other: